A LITTLE ABOUT THE LI-ANTHAWIRRIYARRA SEA RANGER UNIT

Yanyuwa country includes the Sir Edward Pellew Islands and the riverine and coastal areas of the South West Gulf of Carpentaria. The seas around the eight large islands and more then 50 small islets, reefs and rocks of the Sir Edward Pellew Group provide extensive seagrass beds for dugong, turtle and other marine fauna. The mainland islands are home to large numbers of migrating seabirds and shorebirds.

“PEOPLE OF THE SEA” 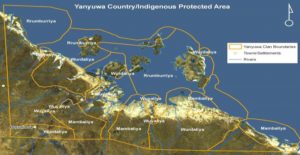 li-Anthawirriyarra (people of the sea) Sea Ranger Unit started out as surveillance and monitoring operation unit. The unit has evolved into a role with a longer term land and sea management planning in this remote region. The Sea Rangers are employed Mabunji Aboriginal Resource Indigenous Corporation through a funding program . The rangers monitor and manage heritage sites such as Macassan camps; monitor and manage turtle and dugong populations and survey, map and eradicate feral animals.

The Li-Anthawirriyarra Sea Ranger Unit is equipped with an impressive range of vessels that suit a variety of needs. From the small Renegades, up to the custom built barge “Wulma.”

More information on our vessels.

The new ranger base is situated at Jawuma (Black Rock Landing)  near King Ash Bay, 45kms North East of Borroloola. The base will accommodate 4 rangers at one time.

More information about the Sea Ranger Base at Black Rock Landing.